So, I couldn’t help it; I’ve fallen off the neural kerning wagon again, thanks to a fascinating article by Sebastian Kosch describing an “attention-based approach” to the spacing/kerning problem.

I have to admit that I am having problems fully understanding Sebastian’s approach, because it contains a number of new concepts that I understand independently, but I am not sure how they relate to one another. So I am working my way through his code, refactoring it and documenting it so that I know what is going on.

But going through the code as a means of understanding the algorithm has highlighted again something that I found when I was working on atokern. The real difficult part of building a neural kerning system is not, paradoxically, building the model; no, the real problem is actually extracting the data out of the fonts in a correct and coherent manner in the first place. I wasted a huge amount of time because I had accidentally cropped out descenders, or included descenders, or used the same scale for fonts with different x-heights, or divided by em-width, or not divided by em-width, and so on.

Even going through Sebastian’s code, I find myself staring at lines like:

So to try to solve both the correctness/coherence problem of dealing with font data and the declarative, semantic issue, I have been working on a library which specializes in providing numerical and statistical data about fonts. Sebastian’s code above would be replaced by:

Here’s another example of using the library which I have unimaginatively named fontmetrics: 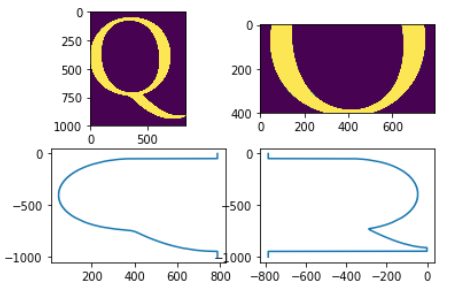 Once it’s a bit more developed and documented (and I’ve rewritten Sebastian’s code in terms of it), I’ll upload it to GH. But that’s what I’ve been playing with this week.